I am thrilled to have reached the top 100 We Are The City Rising Stars for 2018 and to have been awarded a top 5 position in Education & Academia.

Photos from the celebration event at News Room, London Bridge on 12th July 2018 are to follow shortly.

What an amazing honour to share the room with such inspirational women from so many categories.

Thank you to everyone who nominated, voted and supported me.

First of all full disclosure, I am not a rapper, in fact I am probably so removed from knowing most rappers that I wouldn’t know one if they jumped up and shook my hand – or fist bumped, or whatever it’s called……. In fact me and rap – is like Nana on Snapchat. (Although I do like that Mr Eminem)

Second disclosure here is that this whole article has a serious point to make but I have a serious condition that means that when I am excited about something my ability to stay on track of the story is difficult and develop what I call, ‘Verbal Diarrhoea’ – it’s when every thought you currently have just comes spilling out, all at once……. apologies for the visual moment there but it allows you to really understand the next 720 paragraphs 🙂

How This All Started

Ok, so let’s get started, last week I attended the We Are The City – Rising Stars Awards 2018 and I was immensely proud to have won an award for my work with Education and Academia, the category was sponsored by Edit Development (That’s the legal bit covered I think) and I had an absolute ball, The night was amazing and there were many moments of clarity, moments of joy and more WOW moments, then a night at Beyonce & Jay Z’s mansion. So I thought I would give you my take on the evening

I didn’t even get a badge in the Brownies

Honestly, at a young age I joined the Brownies and I loved it, I was going all the way, I wanted to be a Brown Owl and then I got enrolled, took my oath and was given my uniform, I was NOT wearing that, it was itchy and brown, and itchy and well BROWN. So like all committed young girls, I immediately asked my Mum if I could leave, I was immediately allowed too (no I wasn’t) but eventually she realised that the tears and screaming every Monday (her not me) were just not worth it and I left. I didn’t do Judo like my Brother and Sister – who went to championship after championship and was winning medals and trophies all the time, nope I was content being a cheer leader (not a real one, far too much energy required).

So to win this award was huge for me, literally the biggest accolade in my career to date and here’s why………

Recognition should come from within and you’ll meet many women in the next few months and guys in fairness who tell you that you need to love yourself first and you need to proud of who you are (I agree by the way) but what all these people will have in common, is that they can tell you this because they didn’t to begin with and now they do. This was where I was too, I was ALWAYS looking for some kind of recognition, I was desperate for the pat on the back that never came. I had a couple of great bosses who would tell me I was good at my job and generally got the proverbial punch on the shoulder but I was overlooked for awards at work and celebrations of hard work, for one reason or another and it hurt. I learnt to expect nothing and so I began to accept nothing. So when I got an email from We Are The City, well honestly I nearly peed, I could not believe it, I had no idea who’d nominated me and I had less idea of what came next. I’d never been to anything like this before, so I spent the next few weeks stalking their twitter page and googling the past events to see what the etiquette was. I took this very seriously……

So, you get nominated by someone, you share this nomination and if you’re lucky other lovely people will do the same. This goes to some lovely judges and then they decide if you make it to the public votes. If you are lucky enough to get this far your details are shared and everyone and anyone can vote for you, this doesn’t determine if you win or not, but I expect it gives the judges a good idea of what people think of you. You then get through to the top 100 women #watctop100 and the top 5 in your category and you’re invited to the awards evening to celebrate your award and as a ‘WINNER’ you will be given an award. Do not be fooled by the gorgeous ribbon they give you, this is not the award and although I was very grateful and actually more than happy with my ribbon, you actually get a real life proper award. 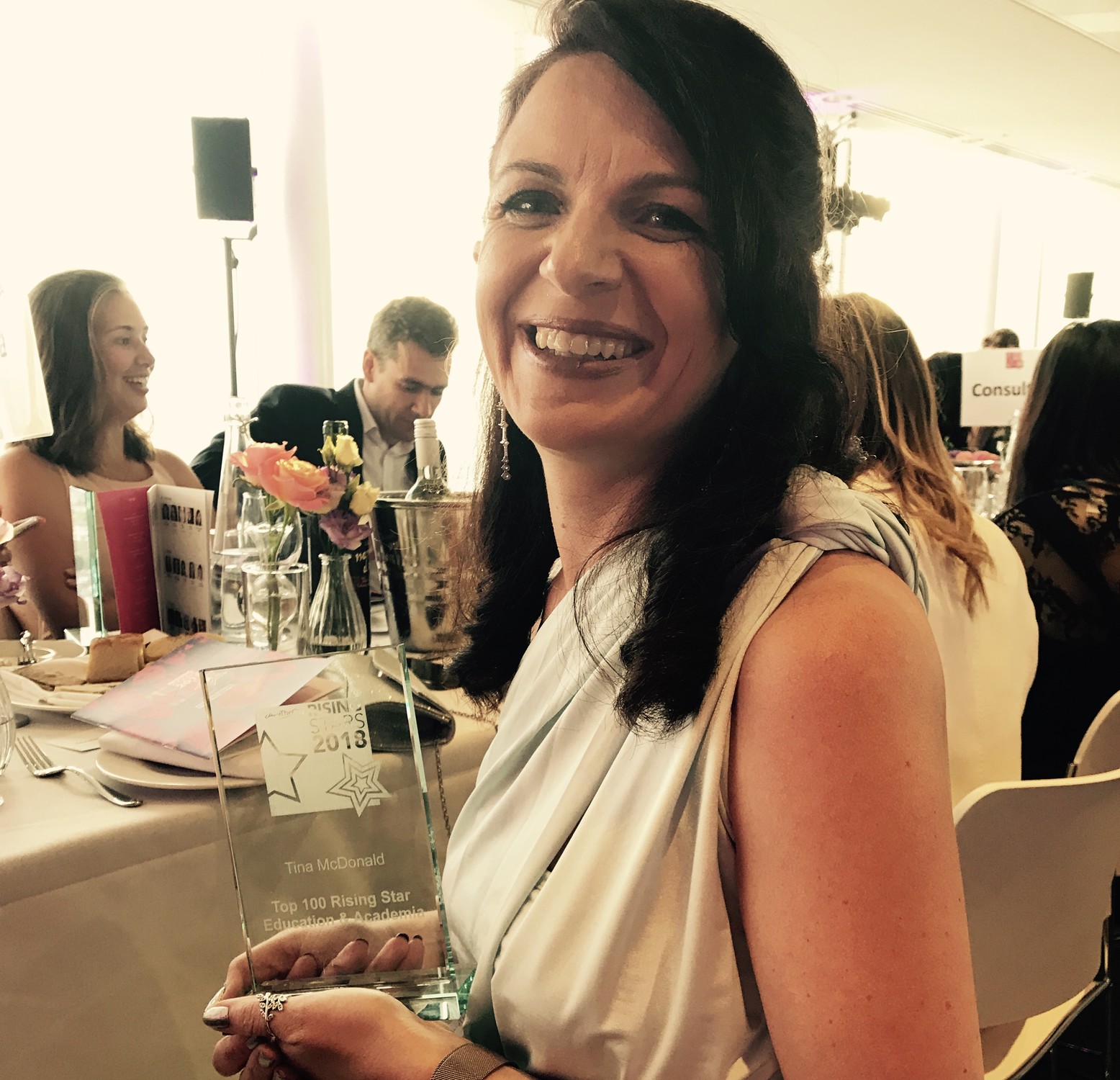 Look how happy I am, a little wine had been consumed at this point and I was comfortable enough to still hold the glass award (which had my name on it and EVERYTHING) so cool, I had sat with the others in my category and those who sponsored the category (NOTE – be careful at awards, you can joke with people and then find out they are REALLY IMPORTANT)

This is where it all gets a bit emosh and full of learning moments and epiphanies, you see I was amongst 99 inspirational women, who are and have been doing, amazing things in their field, all of these women are phenomenal and some of these women are literally going to change the world we live in (if not all of them). Anyone of you still reading this who has ever suffered or seen Imposter Syndrome will know just what happened next, I clung to my ticket hoping that at no point did the lovely Vanessa Vallely OBE realise she had invited the wrong person and whipped the ticket back, I was literally sat at the table thinking there is NO WAY I should be sat here, who on earth nominated me and what am I doing even thinking I should be here (wait, don’t leap at me, just listen). Listening to some of these women and their stories was awe inspiring, leading marches, inventing really cool things to develop the future and I’d love to tell you what the Defence Women are doing but I may disappear suddenly if I do 🙂

So courage kicked in and I started talking to some of these women (the wine had started being served by then so maybe it was that and not courage) and as I was talking to them and they were telling me how amazing they thought ‘I’ was and why they thought I was changing lives, I started to realise WHY I HAD been voted a winner, I began to realise what it actually means to be an inspirational women. It’s not about the change you make, it’s about the change you try to make. It’s not about how many awards you win or how beautiful or smart you are, or what University you went to, or how much money you have. It’s about being a women who wants to make a difference to other humans, animals, technology & the planet.

This was the moment I pulled my shoulders back, looked at my shiny glass award and realised that I did belong, not because I was smart, or changing lives or doing 100s of things or had a really cool uniform (The Defence Ladies Looked AMAZING), it was because I decided I wanted to change something I didn’t like, I chose to do something, to stop something I didn’t agree with, I stood up for someone who couldn’t stand up for themselves and that was what was inspirational. Now it made sense.

And with that in mind I started to think about all the people I know and as one amazing lady Vanessa Vallely OBE said on the night – ‘don’t think about who’s in the room, think about who isn’t in the room’ and I took this with me and I have thought about this all week.

There were quotes galore from that evening and I don’t want to use them all up here, because ‘that’s not all I’ve got’ (you had to be there but it was funny)

But my point was that finally after being in the room with 99 other wonderful women and after sharing a room with 150 people and after listening to how amazing these people are and after just 4 hours, they undid 18 years of self doubt, low confidence and self belief and I walked out of that room feeling like I really did earn that award and instead of hiding it away and not telling anyone, I shared it on my social media, I told people I won, I told people that my name was mentioned in The Times Newspaper (Thank you Chris Duncan) and I shared just about everything that has been tweeted and shared.

So my point here was not just to tell you how grateful I am to everyone who nominated, voted and believed in me because that stuff means more than you will ever know, it wasn’t to gain more likes and love for winning, literally not sure I can keep up with the comments and notifications, no I want to take Vanessa’s words and ask them of you – ‘Who wasn’t in the room’, who could you put on the stage next year, who is your ‘Rising Star for 2019’ because as a winner of 2018, I already know that my life has changed this week, opportunities are already presenting themselves and guess what……

I belonged in that room 🙂